In January of this year, my fiancé and I celebrated our eleven month anniversary [and a much needed date night out]. As an early one year anniversary gift, he surprised me with the fact that he was ready to bring another dog into our home.

If you know me at all, you know the big soft spot in my heart for dogs. For nearly a year I had been joking with him about just showing up at home with a puppy one day, and becoming an old, retired married couple with hundreds of dogs. For a year he pretended [or maybe it was real haha] to be afraid of having any more dogs. Bella was more than enough, he said. So I was completely shocked and so excited when he announced that he was ready for one more. And as much as we were both looking forward to finding our perfect pup, we knew it wouldn’t be right to start the puppy process before our big Europe trip in September.

Fast forward to four weeks ago. Mitch and I were lying in bed on a Saturday morning, looking at puppies online. After seeing the movie, I Love You, Man, we both had our hearts set on a Puggle. For months we had been searching for a breeder on the west coast, but, me being the crazy dog lady that I am, I refused to go with a breeder that seemed to be breeding for money instead of passion. We finally found one in Iowa who had the cutest black coated male, and we were sold. We emailed the breeder, put down a deposit, and five days later I picked our little guy up from the airport [sidenote: we both did a ton of research on flying a puppy – I did not want to pay money for a dog that would arrive traumatized for life]. 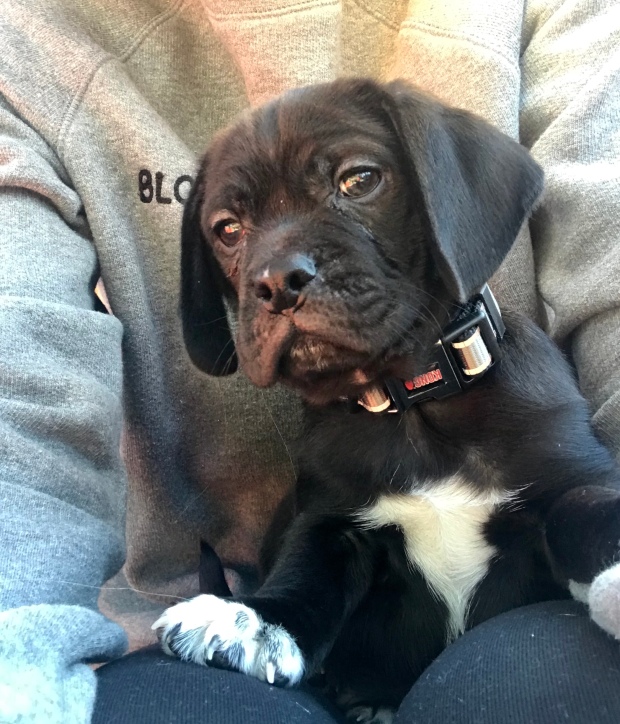 Enter: Otis. Spunky, vocal, and the bravest little dude the world has ever seen. Hence why I decided that we needed doggy insurance. Actually, it was about 6 months ago that I began researching the different pet insurance companies, after I took Bella in for a bit of holistic healthcare [look for a post about this to come].

You guys know I will pay any amount of money to keep my pets healthy and happy. But having a 6 year old Doberman who eats raw is costly enough without the added vet bills, not to mention a new puppy who needs regular vaccinations and really likes to live life on the edge. Working in the health insurance industry myself, I knew it would be more beneficial for me in the long run if I purchased insurance for my pups.

I am so thankful I did.

Five days before we left for Europe, I took Bella on a hike with my friend and her German Shepherd pup. They ran around like crazy, and later that afternoon I noticed Bella limping. Knowing I would be boarding her for two weeks, I took her to the emergency vet near my home to have her examined. Between the x-ray the vet took that day, the fee to actually see a vet at an emergency clinic, and the laser treatments and blood tests after Europe because she wasn’t healed.. Well, let’s just say the numbers added up quickly. Luckily, because I signed Bella up for insurance, I will get reimbursed for all of it!

One of the other benefits of pet insurance is that you can easily customize the plan you wish to sign your pet up for. There are different deductible options, and tons of riders [add-ons] available to cater to your pet’s specific needs. And, compared to the cost of x-rays, acupuncture, blood tests, vet visits, etc., the insurance is pretty freakin’ cheap.

I definitely don’t think it’s necessary for everyone. The only reason I even looked into it in the first place was because Bella is starting to enter her “older” dog years and I want to be able to cover as much of her healthcare expenses as I possibly can. And the only reason I added Otis to it was because he’s a daredevil and if either of them is going to get seriously injured it will be him [fingers crossed that doesn’t happen, though LOL].

I only compared two different pet insurance companies when I looked, and I ended up going with Trupanion [I felt like they had a good variety for a bit cheaper cost]. There are tons of options out there, though, and some employers offer discount programs that include pet insurance [worth checking into!].

Unfortunately I won’t be much help in referring anybody to any companies, as I’m super new to pet insurance myself, and I don’t personally know any other pet owners that have it. But if you have questions on plans and what they cover, I can help you with that, and I’m happy to! Please feel free to ask.

There was an error retrieving images from Instagram. An attempt will be remade in a few minutes.

Navigating through a modern life with a holistic flare

≫ s h e l l e y ≪ not short for michelle. A clean-ish eating mama to a cub living where the air is salty+life is sweet. wanderlusting through mom life and writing about it...

Kate from the States

"And then I realized that the best way to learn was through adventure..*"

The life of someone who works in customer service is always an interesting one. Here are some thoughts, ideas, and secrets about the industry. Would you be able to survive it?

Declutter and Organize Your Home